The National Black Nurses Association is fortunate to have great nursing leaders among its leadership in a variety of areas. The summary below is just an example of the signature programs and activities that draw African American nurses to NBNA. These programs help NBNA members grow stronger as they seek to provide culturally competent health care services in our communities.

The National Black Nurses Association (NBNA) was organized in 1971 under the leadership of Dr. Lauranne Sams, former Dean and Professor of Nursing, School of Nursing, Tuskegee University, Tuskegee, Alabama. NBNA is a non-profit organization incorporated on September 2, 1972 in the state of Ohio. NBNA represents 150,000 African American registered nurses, licensed vocational/practical nurses, nursing students and retired nurses from the USA, Eastern Caribbean and Africa, with 92 chartered chapters, in 35 states.

The National Black Nurses Association’s mission is “to represent and provide a forum for Black nurses to advocate and implement strategies to ensure access to the highest quality of healthcare for persons of color”.

Since its inception, improving the health of African Americans through the provision of culturally competent health care services in community based health programs has been the cornerstone of the National Black Nurses Association. NBNA is proud of its Collaborative Community Health Model developed by Dr. Linda Burnes Bolton and Dr. C. Alicia Georges, NBNA past presidents. This model is the basis for the collaborative partnerships and health programs that are the hallmark of the National Black Nurses Association. The 92 chapters are the primary mechanism through which the national, state and local community-based programs are successfully implemented. African American nurses who are direct members (in cities where no chapters are established) also assume leadership roles in mounting community based programs. NBNA chapters and direct members provide a host of preventative health screenings and health education including high blood pressure, blood glucose, cholesterol, HIV, cancer, sickle cell and mental health.

Working in partnership with community based organizations, corporations and other organizations, NBNA has sponsored health fairs and health education and outreach for national organizations such as the National Urban League, International Black Professional Firefighters, One Hundred Black Men of America and the National Council of Negro Women. NBNA has collaborated with the Black Congress on Health, Law and Economics, a 17 member, multi-professional organization; Oncology Nursing Society, American Cancer Society, American Heart Association, American Diabetes Association, American Association of Nurses in AIDS Care; National Coalition for Health Professional Education in Genetics; Partnership to Fight Chronic Diseases; and, National African American Drug Policy Coalition; Black Women’s Health Imperative; and, the International Society for Hypertension in Blacks, among others.

Its goals include support for the development of a cadre of ethnic nurses reflecting the nation's diversity; advocacy for culturally competent, accessible and affordable health care; promotion of the professional and educational advancement of ethnic nurses; education of consumers, health care professionals and policy makers on health issues of ethnic minority populations; development of ethnic minority nurse leaders in areas of health policy, practice, education and research; endorsement of best practice models of nursing practice, education, and research for minority populations.

NBNA presents nursing awards in nine categories and Life Time Achievement Award and Trailblazer Awards. Scholarships are offered to nursing students at all levels and chapter awards are presented for community service; service to youth; and for chapter recruitment and retention.

In 2011 NBNA launched two new programs. The Under 40 Forum was developed by and for NBNA members who are under the age of 40 years old to help them build and sustain the base of younger members. And, to help fuel the pipeline, the NBNA Summer Youth Enrichment Institute was held for young people aged 9-18. Both programs were headed by NBNA President Dr. Debra A. Toney.

In 2012, through the vision of the NBNA immediate Past President, Reverend Dr. Deidre Walton, the Diversity Institute was launched. This four hours CEU session provides state of the art information on innovations related to nursing and health care by diverse providers to diverse populations to enhance health outcomes.

The 40 pages NBNA Newsletter is published quarterly. It is filled with information on the membership and articles written by NBNA members, NBNA partners and sponsors on a variety of nursing and health issues. Themes have included public policy, aging and research. In 2005, NBNA published a special issue on “Surviving the Storms: Katrina, Wilma and Rita”. The articles were written by NBNA members as survivors and caregivers. In 2009, NBNA produced a 56 page newsletter on global health. A 50 page newsletter was produced on public policy issues in December 2010. In February 2012, NBNA published the newsletter focusing on men’s health care and written by male nurses.

Based on an article that she wrote for the Newsletter in 2006, Cynthia Hickman, Member, Fort Bend County Texas Black Nurses Association and St. Luke’s Episcopal Hospital, Houston, Texas, received a $50,000 leadership award from Johnson and Johnson.

Dr. Ronnie Ursin is the Editor-in-Chief.

In October 2013, NBNA received a $100,000 grant from the United Health Group for scholarships and supportive services for 12 scholars.

In January  2012, The American Nurses' Foundation granted NBNA and Johns Hopkins University School of Nursing $20,000 to fund a project entitled "Enhancing the Diversity of the Nursing Profession: Assessing the Mentoring Needs of African American Nursing Students"
Drs. Phyllis Sharps and Bobbie Perdue are the PIs and Dr. Deidre Walton is the Project Director. The purpose is to produce an evidenced-based-mentoring program for African American/Black Nursing Students from LPNs/LVNs to PhDs.

In August 2012, NBNA received a grant, “The Preventive Health Action Team”, from The Coca Cola Company to promote health and wellness through 15-18 NBNA chapters.

In April 2011, NBNA partnered with the U.S. Office of Minority Health and other organizations to create a consensus report entitled “Pathways to Integrated Health Care: Strategies for African American Communities and Organizations”.

In October 2010, NBNA and the National Medical Association released a consensus report on Respiratory Syncytial Virus (RSV) in premature infants. The report was sponsored by MedImmune.

In September 2005, NBNA and five other organizations were awarded a $300,000 grant from the U.S. Office of Minority Health to provide services to Katrina survivors. In 2006, NBNA published a manual on surviving disasters which was distributed to 1000 entities in Houston and along the Gulf states.

In 2004 and 2005, NBNA received a grant from the John Hartford Geriatric Institute to publish two newsletters that focused on aging. In 2006, the existing articles and new articles were published on the NBNA website as the “Special Report on Aging”. The NBNA website is www.nbna.org.

Other programs have included the Artery Explorer, community based education program on atherosclerosis funded by AstraZeneca; Helpful Answers Program, community based prescription drug assistance program funded by Pfizer; and RSV in premature babies funded by MedImmune.

In 2011, NBNA signed a Memorandum of Understanding with the National Mentoring Cares Program, headed by Susan Taylor, formerly Editor in Chief of Essence Magazine.

In 2011, NBNA signed a Memorandum of Understanding with the American Red Cross to help provide nursing services in times of natural and man made disasters. In 2006, NBNA representatives participated in several American Red Cross workshops on diversity. The purpose of the workshops was to craft curriculum that would help Red Cross volunteers to provide services in a culturally competent manner.

Under the leadership of Dr. Deidre Walton, NBNA President, NBNA launched a Diversity Institute focused on racial and ethnic diversity, gender issues and issues in the workplace. The Institute was held during the NBNA 40th Annual Institute and Conference, July 25-29, 2012, in Orlando, FL.

Under the leadership of then NBNA President Dr. Debra. A. Toney, NBNA launched the NBNA Founders Leadership Institute during the 2009 NBNA Conference in Toronto, Canada. NBNA selects 20 nurses to learn how to enhance their leadership skills, helping them to achieve the next level of leadership on their jobs, within the NBNA, as volunteers and or paid advisory board members.

At the occasion of the 20th Anniversary of the National Black Nurses Day on Capitol Hill, NBNA launched its National Obesity Initiative on February 14, 2008. The Obesity Initiative is NBNA’s effort to help stem the tide of chronic diseases caused by obesity and lack of exercise. The 79 NBNA chapters were challenged to collectively lose 360 pounds each. Each chapter is to hold continuing education sessions on obesity and co-morbidity factors such as diabetes and cardiovascular disease. To get physically active, each chapter is to hold physical activity events and they can be linked to collaborating events like city wide walks. On May 3, 2008, each member was asked to walk one mile. This is the Saturday before National Nurses Week, May 6-12. A compendium of NBNA activities will be published.

In 2010, NBNA seeded 10 chapters with $1000 grants to develop their own programs on obesity for their chapter members and community residents. The Coca Cola Company provided an additional grant for its Healthy Living Program.

At the 2006 Annual Conference, NBNA launched the Institute of Excellence which is to honor African American nurses for their work in the areas of clinical skills, research, academia and policy. Twenty-five nurses were inducted in the first class.

In 2011, NBNA hosted its Institute of Excellence Ruby Awards Luncheon featuring the NBNA Nurses of the Year and the Corporate Partners Awards.

At the NBNA Conference, NBNA offers scholarships to student nurses at all
levels. The NBNA chapters also provide scholarships. The scholarships are
based on merit and financial need. United Health Foundation has given
$40,000 over the last four years to support the NBNA Scholarship Program.
Other corporations that have given generously have been Kaiser Permanente,
Mayo Clinic, BET, PepsiCo, Gannett Health Group and VITAS Innovative
Hospice Care. In 2012, the Tuskegee Airmen Scholarship Foundation provided
the Della H. Raney Nursing Scholarship for $2000. The scholarship is named
after the first chief nurse assigned to the Tuskegee Air Field. In 2013, a new
scholarship, Mrs. Lynne Edwards Research Scholarship, will be supported by
the Dr. Linda Burnes Bolton, past NBNA President and the Robert Wood
Johnson Foundation and given to a PhD candidate.

NBNA recognizes nurses who have made major contributions throughout their nursing career and are honored with the NBNA Life Time Achievement Award and the NBNA Trailblazer Award. Awards are also provided in nine other categories. The awards are made at the NBNA Conference. The Nurse of the Year Awards were launched during the tenure of NBNA President Dr. Hilda Richards.

In June 2009, the American Heart Association/American Stroke Association awarded the National Black Nurses Association its National Award for NBNA’s participation in the Power to End Stroke Campaign. NBNA recruited over 90 ambassadors and reached thousands of individuals about stroke prevention. 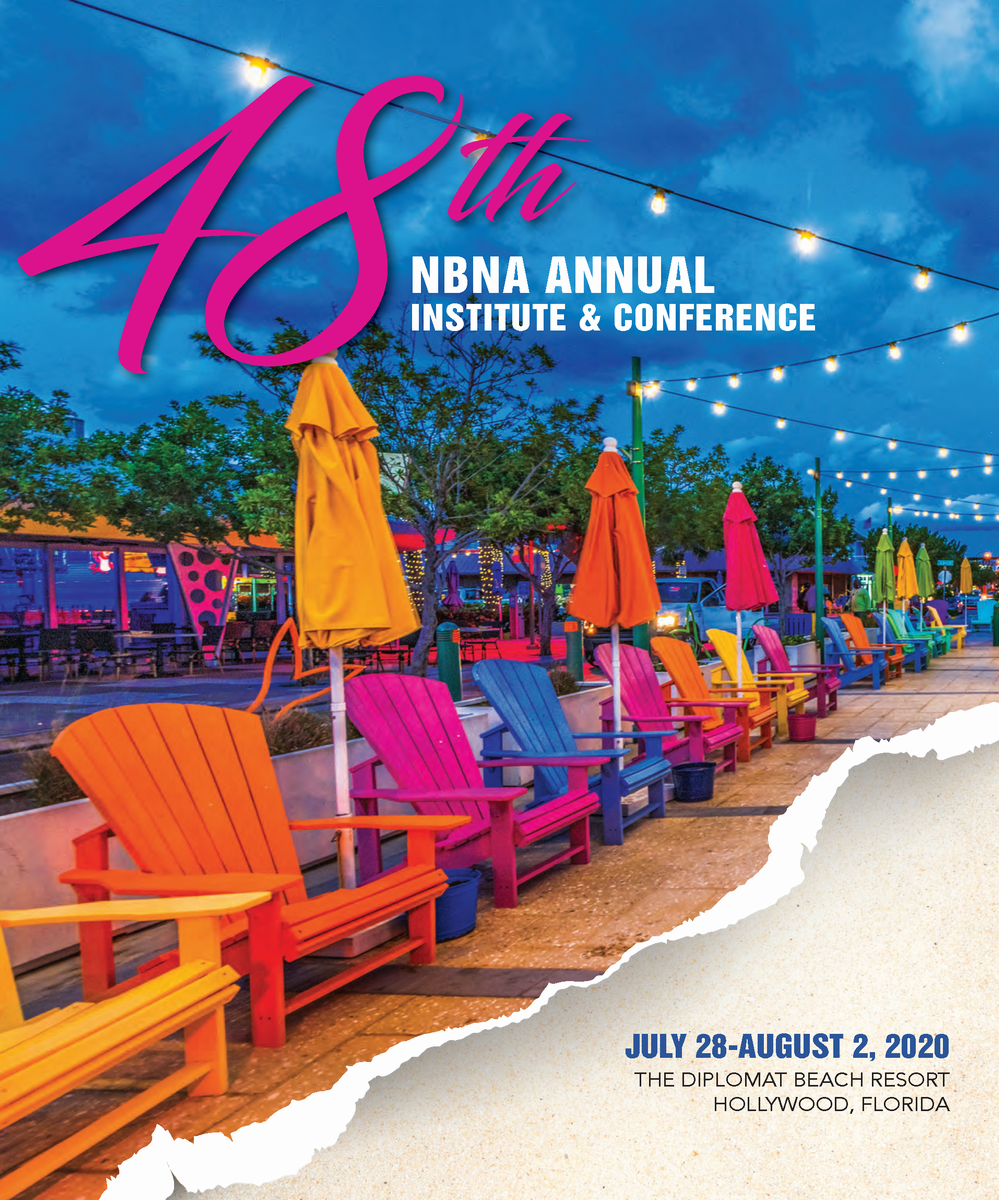